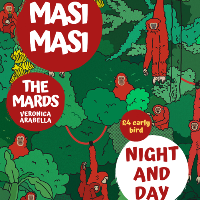 This event has already happened!
This event occurred in February 2020. If you're looking for a upcoming event, try the links below:
View more events.

Writing tunes about their uni lives and friends around them, The Mards take influence from early 2000's indie bands such as The Kooks, Shed Seven and We Are Scientists and old style pop-punk to create a blend of indie-rock that tells tales from their time in Manchester.

Veronica Arabella and her new backing band bring feminine and soft visuals into an otherwise male dominated industry. Performing RnB and alternative hip-hop, she is influenced by Still Woozy, Tyler the Creator, and Frank Ocean. Veronica Arabella has two upcoming EP’s this year, one of them being a solo EP titled ‘Brackets’ and the other a collab with Djanga, titled ‘VVAVY’.